The History of Pebbling

When?  Where?  Who?  These are difficult questions to answer.  How?  Is the question we will try to answer.  Pebbling the ice is not something a person does to outdoor, natural ice.  Once curling moved inside, the pebbling became a necessity.  Therefore, pebbling began in Canada and the USA.
The earliest reference we have found is in John Kerr’s book Curling in Canada and the United States published in 1904.  Mr. Kerr writes:  “Pebbling is the final finishing touch for making ice for curling.  Strange as it may seem to the uninitiated, in this final process hot water is used; and when the mercury indicates a near approach to zero the water may be almost at boiling point, the objective being that the heated water may melt a seat for itself in the ice-sheet before freezing.  … In all the best rinks it is now applied by means of a “sprinkler”.
Another member of this 1902 Scots tour wrote:  “The surface of the ice is either sprinkled or corrugated.  In the former case a watering-can with a very fine rose is used, and hot water is sprinkled sparingly over the whole surface.  This, of course, makes no pattern on the ice.  In the latter,  small streams of water issue from a pipe about 5 feet long, with a pin-head aperture an inch apart, the pipe being fed from a tank attached to it containing hot water.  This is rapidly run diagonally across the ice first from one side and then across so as to make a diamond pattern.  This gives a certain texture to the ice surface, so that the stone answers more readily to the turn of the hand than it possibly can do on perfectly smooth ice.”
Try to imagine a 5 or 6 foot pipe with small holes drilled in one straight line an inch apart the entire length of the pipe.  The pipe is connected to a six or eight foot hose which is then connected to a large tank of water.  Now imagine a three man team to work this contraption.  One fellow would lay the pipe on the ice near the hack on sheet number 1.  The other two gents would handle the tank of water.  When they are all ready, someone turns on the water and it flows out of the small holes onto the ice.  The man starts dragging the pipe across the ice in a diagonal ending up at the far end of sheet number 4.  They repeat the process until the entire arena is covered in one diagonal direction.  Then they start again at the near hack on sheet 4 going diagonally to the opposite end of sheet 1.  This new pebble crisscrosses the first pebble. The result is long ridge pebbling in a diamond shape instead of the individual ‘dots’ that we see today.
What would this pebble look like?  The picture below was taken at The Detroit Curling Club in 1949 during the Scots Tour.  The players stacked brooms for a photo-op. 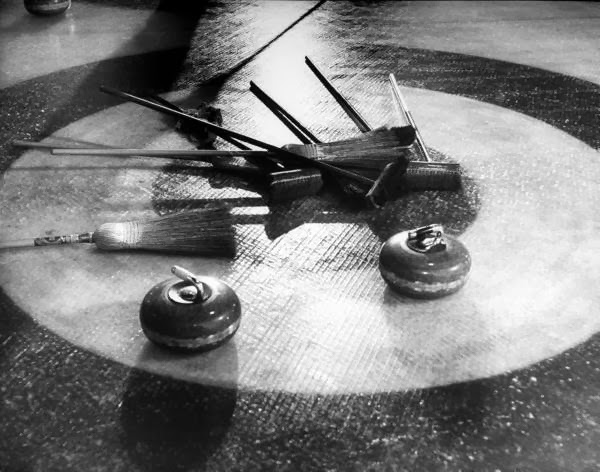 When the photo is enlarged the diamond shaped “ridge” pebbling is easy to see. 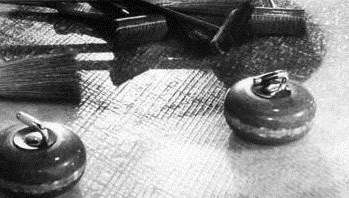 This type of pebbling is normally done only once per week.  Even at the Canadian Brier they only made ridge pebbling at the start of competition.  No more pebbling during the week.  As the week progressed the ice would become more “swingy”.


Posted by Angus MacTavish at 4:37 AM