During every curling game you have played or watched the laws of physics are not merely bent but appear to be broken.  A key component to curling is the curl.  You all know that putting a slight clockwise turn on the delivered stone will make the stone curl to the right.  A counterclockwise twist will send the stone to the left.

That’s all fine and good, except that the basic laws of physics say the stone should curl in the opposite direction.

Don’t believe me?  Go to your kitchen.  Take a drinking glass, turn it upside down and slide it clockwise across your counter-top.  (Wait!  Maybe you should do this on the floor.)  You will see that the glass “curls” to the left.  Magic?  No.  As the glass slides along, the front of the glass is made heavier by the energy of its slide and its rotation.  As it turns clockwise the force of friction pushes the glass in the opposite direction.

But, this does not play out with a curling stone, which has a raised circular ridge along the bottom, similar to the rim of the drinking glass.  This mystery has pit physicist against physicist.  One theory claims that the weight of the stone and the force of its slide heats and partially melts the ice.  This creates a micro-thin layer of water that reduces friction at the front of the stone.  Because the force of friction is now stronger at the back of the stone it curls in the opposite direction.

The other group theorizes that the pebble on the ice causes the curl.  As the front edge of the stone crosses the ice, it "machines off" the top of the pebble. This causes the stone to pivot around the crushed pebbles and curl in the direction where the angular momentum is higher. 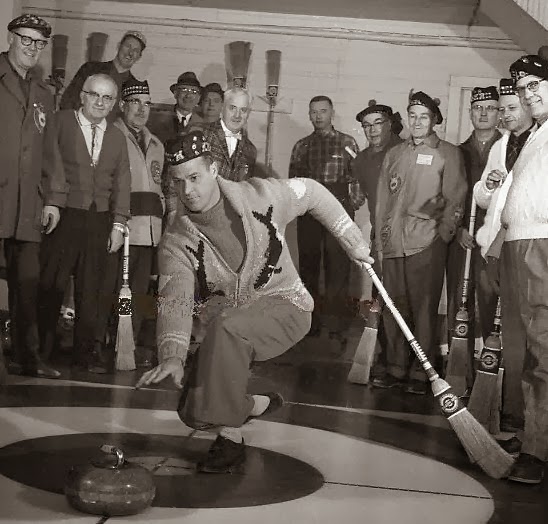 Do you recognize this man? (This picture has nothing to do with the article above)

(Thanks to the Columbus Dispatch for writing the original article)

Posted by Angus MacTavish at 6:51 AM