Honey! I shrunk the House.

Since the mid 1800’s the rules of curling, as written by the Royal Caledonian Curling Club, described the house as a circle with a seven foot radius - or a diameter of 14 feet.  These rules were reiterated by the Grand National Curling Club in the USA. 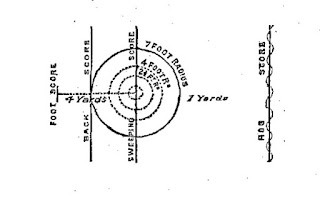 During the Scots Tour to Canada and The USA in 1937-38 nearly all USA and Canadian curling clubs were playing on ice where the house had a diameter 12 feet.  A clear violation of the Rules of the game.  How, why and exactly when this evolved is unclear.  At the 1938 annual meeting of the Royal Club, the Scots that had curled on the smaller ice proposed that the rules be modified to stipulate that the scoring area be not less than 12 feet in diameter and not more than 14 feet in diameter.  This was approved and the rules published in 1938 stated this changed.

Though a member of The Grand National Curling Club, The Detroit Curling Club was more aligned with the Ontario Curling Association.  Perhaps the OCA modified the rules earlier.  Newspaper articles we have uncovered about The Club state that the house was a 14 foot circle from 1886 to 1903.  We have not found any photos to verify this fact.

Pictures of The Club in 1935 show unpainted ice and only black lines outlining the house, button, tee line and the line from tee to hack (no center line from tee to tee existed).  Painting the rings did not start until 1936.  These pictures are B&W so we are not positive what colors were used.  The main sheet of ice remained unpainted so that you could see the concrete floor below the ice.

Lang may ur lum reek, Angus.

Posted by Angus MacTavish at 3:58 PM