If you are a Detroiter, you know about Sander’s Hot Fudge and other Sander’s candies, but you must be of a certain age to remember the Sander’s Lunch counters.  At one point, there were over 100 stores throughout metro Detroit most of them with Lunch counters.  The menu was also your place-mat and they printed a new one each weekday. 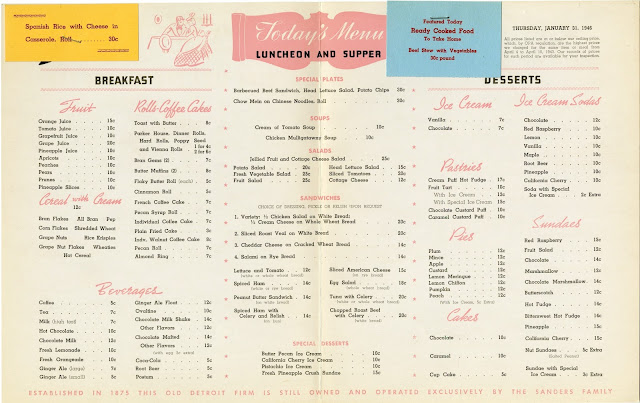 On the back of the menu different articles were printed.  On this January 31, 1946 menu was an article about The Detroit Curling Club:  “Curling is a Friendly Game - For three quarters of a century, the fine old Scottish game of curling has had its devoted circle of enthusiasts in Detroit.  For sixty years, they have had a club of their own, often the scene of jolly Bon Spiels [sic] as the members entertain clubs from neighboring Canadian cities.

“The Detroit Curling Club on West Forest Avenue is affiliated with the Ontario Curling Association, with whose members it visits back and forth for friendly games throughout the season.  Its rink is made of artificial ice and carefully maintained so that the game can be played all winter long.

“While not a fast game to watch, curling holds a fascinating lure for players.  In contrast with other winter sports, it does not depend upon power and speed, but rather upon accurate judgment of distances and exact control.  Every throw of the stone is a precision operation.”

Interesting how you can find things about the history of our Club in the most unusual sources.