Did you curl one night this past week?  Were you warm enough?  Could you see the entire rink with ease?  One-hundred thirty-one years ago, the members of The Club had it a little more difficult.

Tuesday December 21, 1886.  The evening was a chilly 30 degrees; winds out of the NW with light snow falling.  DCC members were preparing for the first game of curling ever played in Detroit under electric light.

The City of Detroit had contracted the Brush Electric Light Company to build 122 electric light towers to illuminate Detroit.  These towers were 150 feet high with a ring of electric arc lights at the top.  Their lights were as bright as the moon; sometimes called "moonlight towers."  One of these towers was located at a corner of the Athletic Field near Woodward Avenue and Canfield Street. 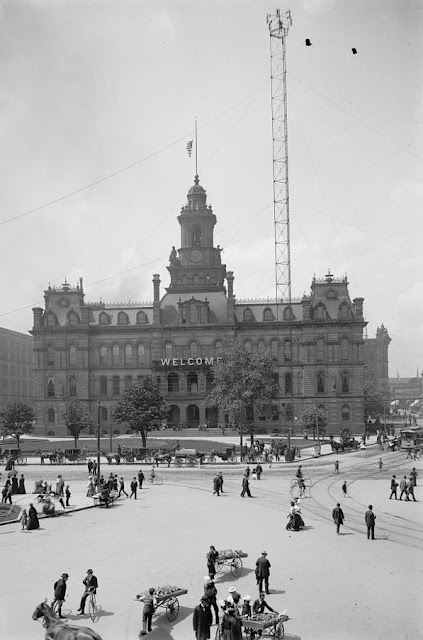 This night it was a hotly contested battle.  To those who are initiated into the spirit of the royal old Scotch sport, it was an intensely interesting spectacle.  The play of rink No. 1 was directed by John Williamson, while his son, Robert Williamson, called the shots for rink No. 2.   The former’s men were C.T. Cole, J.H Kenn and A.W. Baxter; while the latter’s were J. Feuder, George O. Begg and T. Williamson.

Rink No. 1 found itself entitled to that designation by defeating No. 2 by a score of 16 to 13, the game lasting three hours.

And so, to bed, perchance to dream,
Angus MacTavish

Posted by Angus MacTavish at 6:22 AM