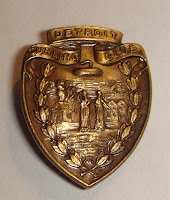 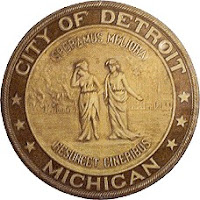 The original Detroit Curling Club crest was patterned after the City of Detroit’s seal.  We are unsure when it was adopted, but we do know that it was replaced by the current crest in 1934.  In 1805, fire destroyed most of the settlement of Detroit.  The City of Detroit’s seal was originally sketched by J.O. Lewis in 1827.  The motto “Speramus Meliora Resurget Cineribus” is translated to “We hope for better things.  It will arise from the ashes”.

The 14K gold pin above showing ‘DCC 1928’ is engraved on the back:  “Patron’s Prize Won by Mrs. Chas. Boyle”.  There was a Club member named Charles Boyle in 1928.  How or why this pin was awarded; how many years that it may have been awarded are all unknown to us.  We have found no other references to the “Patron’s Prize” since we have no Board minutes nor Scots Wha Hae issues (DCC newsletter) from this time-frame. 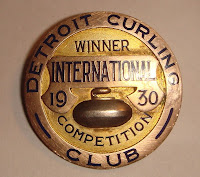 Bonspiels often award a pin to the winners.  Above is the only DCC pin awarded in the 1930's that we have seen.  Pin trading has been popular among curlers since the 1920’s.  Some teams in the mid-last-century had their own nickname and designed their own pin for trading as the traveled to bonspiels.  The Detroit Polecats is one example from the Detroit Club.


Posted by Angus MacTavish at 4:38 AM