The Bonspiel is ON

“Unfavorable weather caused the committee of the Detroit Curling Club to advise several of the teams entered in the Bonspiel not to come, but a change in the atmosphere occurred just in time to bring the near-by teams here for the opening.  The Club held off until Tuesday morning before being certain of ice, and then it was too late to reach some of the teams in time to bring them on, yet fourteen are on hand and the play will continue through two more days at the rink on Forest Avenue.

“The ice was made under difficulties and had to be built almost sheet by sheet.  There was not time to flood the place and be sure of its freezing; hence on the opening yesterday the surface was not as smooth as is desired.  The cold of last night, however, allowed the flooding of the rink, and the ice will be all that can be asked when the merry Scots assemble this morning.

“The Bonspiel is the greatest ever undertaken by a club.  The prizes are the finest and attracted some of the best curlers in the United States and Canada.  The curling began late yesterday morning and continued throughout the day.

“Windsor and Grand Rapids have new clubs and the games between the rinks representing them were interesting.  The Windsor club is but two weeks old, and the victory over Grand Rapids will materially help the organizers.

“There was not only good curling but plenty of fun watching and hearing the curlers.  The play will resume this morning and continue all day.  The rink is located on Forest Avenue, between Sixth and Seventh streets.” 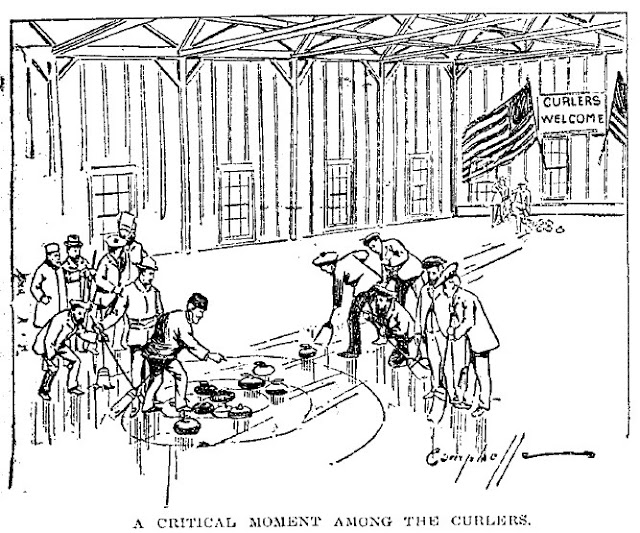 Ed Note:  The drawing above appeared in the Free Press with the article.  It is the only image of the inside the original Detroit Skating & Curling Club that we have seen from the 1800’s.

Posted by Angus MacTavish at 8:49 AM