Official Battle Cry of The Detroit Curling Club is...

..."Scots Wha Hae" and it is the name of The Club's newsletter.


Scots Wha Hae (English: Scots, Who Have) is a patriotic song of Scotland which served for centuries as an unofficial national anthem of the country.  The lyrics were written by Robert Burns in 1793, in the form of a speech given by Robert the Bruce before the Battle of Bannockburn in 1314, where Scotland maintained its sovereignty from the Kingdom of England.   (Think of Mel Gibson in Braveheart).

English translation
'Scots, who have with Wallace bled,
Scots, whom Bruce has often led,
Welcome to your gory bed
Or to victory.

'Now is the day, and now is the hour:
See the front of battle lower (threaten),
See approach proud Edward's power -
Chains and slavery….

The oldest issue of The Club’s newsletter (December 1934) in our records does not use this quote.  The second oldest issue in our archives is dated January 14, 1936, Vol. 3, No. 3.  The masthead reads:

The font size and style changed a few times over the years, but this remained the masthead on the newsletter until January 1963.  We have never found a reference as to why it was used.  But we assume that with so many ‘Scotchmen’ in The Club in the early years that something that was considered a patriotic song of Scotland would be adopted by The Club’s membership. 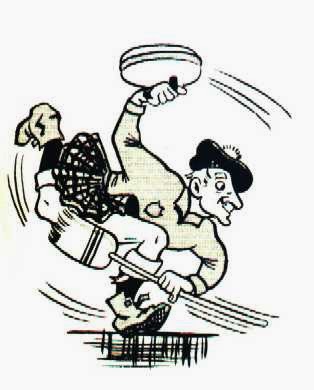 Posted by Angus MacTavish at 1:00 PM