The Detroit Curling Club was the only U.S. stop on the Scots tour in 1938.   Detroit’s long time membership and participation in the Ontario Curling Association was the reason.

This was the first Scottish Tour that the team did not travel with their own curling stones.  Interestingly not much was written about the inconvenience of traveling with 48 curling stones on the previous tours.  Once again they did bring their push-brooms - this time the entire team used them – they claimed that this style of broom was better on artificial ice.  Speaking of which:  This was the first visit when most (if not all) of the curling clubs had artificial or compressor made ice rinks.

Saturday January 22nd the Royal Caledonian Curling Club’s Team arrived in Detroit from Kitchener, Ontario.  They immediately had morning games against Detroit, Sarnia, Chatham and London.  The Scots met defeat with an aggregate score of 52 – 37 even though the Scots won 3 of the five games.

Lunch was served at The Club.  During the afternoon the visitors were taken on a tour of Ford Motor Co. and Greenfield Village.

After a dinner at The Club the evening matches saw 5 Detroit teams defeat the visitors with a score of 57 to 38.  It was estimated that 300 Detroiters were in attendance at the old club on Forest that night. 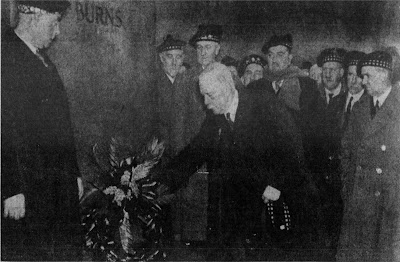 Sunday morning the team attended services at the Immanuel Presbyterian Church.  They laid a wreath at the foot of the Robert Burns statue in Cass Park.  The upcoming Tuesday would mark the anniversary of Burns’ birth.  A dinner was held at the Detroit Athletic Club and the team departed at 4:45 p.m. for Toronto.
Y’r ob’dn’t s’vn’t,
Angus MacTavish

Posted by Angus MacTavish at 7:54 AM