The Royal Caledonian Curling Club team arrived on the evening of Saturday January 28, 1967 at Willow Run Airport in a fierce snowstorm.  The worst part of the storm hit Lansing, Flint and northward with over 20 inches of snow.  Eventually they deplaned and were met by Nels Brown and they were taken to the Pick-Fort Shelby Hotel for a dinner reception and a good night’s rest.

Sunday morning started with a bang.  The team was invited to join the Sinners Club for breakfast at The Club.  Scottish curler David Duncan described it like this:  “This was a regular Sunday morning ritual when the men all turn up. Cook the breakfast, make a draw, curl, stack brooms and sometimes curl again before lunch.”  We can only imagine the goings-on that Sunday morning.

Dinner Sunday evening was at the Grosse Pointe Yacht Club.  Each member of the team was presented with a magnificent trophy - a silver figure of a curler in action - by courtesy of Samuel M. Renfrew (Sam was a member of the 1962 US team to tour Scotland).

Monday morning games saw the Detroiters victorious:  53 – 50.   Lunch was served at The Club followed by a trip to Windsor to tour the Hiram Walker Plant.

No curling on Tuesday.  The visitors were taken to Dearborn for a tour of the Ford Motor Company and lunch at the Dearborn Inn.  At 6:00 p.m. they all headed to the airport for a flight to Cleveland. 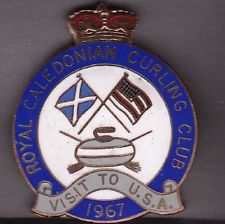