An article in the February 12, 2013 issue of the Scots Wha Hae read:  “Our new club crest sign is in the works.   At the last board meeting, they approved the committee to interview the two low bidders and select the winning vendor to build and install a new illuminated sign intended to be placed on the front of the building. The expectation is that the new sign will be installed before the annual meeting. Things are looking up!”  This reminded me of…

“January 2, 1900.  Detroit City Council; Sixth Ward.  Resolved.  That the Board of Public Works be and is hereby authorized to issue a permit to Wolverine Electric Co. to construct an illuminated sign, 3x7 feet, between lot line and sidewalk, north side of Forest avenue, between Sixth and Seventh streets for The Detroit Skating and Curling Club.

“Provided.  That said work shall be performed under the supervision of the Board of Public Works, and provided further, that no rights in the public streets shall be considered waived by this permission, which is granted expressly on the condition that said illuminated sign and all obstructions in connection therewith shall be removed at any time when so directed by the Common Council.

I wonder what happened to the old sign – probably still sitting in Joe’s barn. 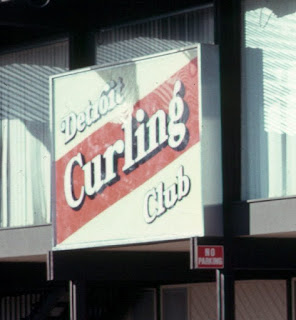 Sparkling signage to all and to all a good curling, Angus.

Posted by Angus MacTavish at 7:34 AM