Hockey, Ice Skating and Curling at The Club

“Two hockey teams have been formed at the Detroit Curling Club and practice will begin tomorrow night.  The Canadian rules will be observed.  Toward the end of the week a game will have the support of The Club and it is thought that it will become one of the most pleasant features of an evening at the rink.  Improvements to the clubhouse will be made so that the spectators can witness the play from above.

“In the skating carnival at the rink last night Clayton Busch won the gentlemen’s prize and Miss Jessie Parkinson that for ladies.

“Two of the club matches in curling were played yesterday afternoon, resulting in wins for Skips Baxter and Cooney.”

Detroit Free Press December 27, 1896.  This was thirty years before the Red Wings were formed.  At least they curled on the ice before the ice skating & hockey!!! 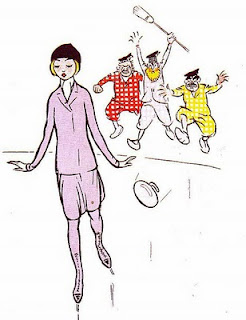 Posted by Angus MacTavish at 5:54 AM