The Broom and The Bottle

Last week’s James Bond article generated two reader questions.  What is the wooden ‘bowling pin’ in the video used for?  When were push-brooms or brushes first used?

In many curling photographs from Europe we see the use of a tee-marker.  In Scotland they are called ‘bottles’.   In Switzerland they are called ‘dollies’.  Painting the circles is a comparatively recent custom. For a large part of the history of curling the curler played to a house which was only scored in the ice. It was difficult to see from the hack how the stones lay in relation to the tee. 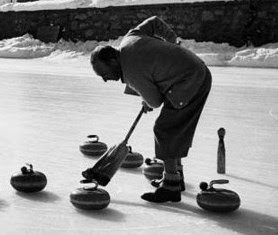 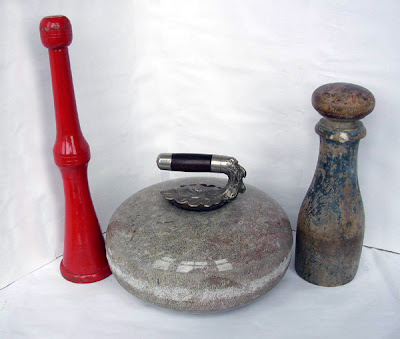 The original way of reducing this difficulty was to mark the tee with a movable object, known as the 'tee-marker'. This was usually made of wood so that if a stone were to come into contact with it, it did nothing to affect the running of the stone. The marker had to be small in cross-section so that it took up as little room as possible and high so that it could be seen above any stones that were lying near it. What better shape for this device than a bottle? Hence in many places the 'tee-marker' was known as 'the bottle'.  We thank Bob Cowan for this information.  You can read more at his curling blog.

As for curling push brooms or brushes…We have seen photographs from the 1800s in Scotland that clearly show curlers using brushes.  “The Curler Companion” by W.H. Murray states:  “It was during the 1922 tour that the Scots introduced the long-handled push-brush to North America”.  During this tour of Canada and The USA the Scots visited The Detroit Curling Club in February 1923.  We have photographs and newspaper articles around The Club that show the brush in use by the Scots.

The picture below was taken at The Detroit Curling Club during the 1949 Scots Tour.  Note the HOG line marker on the wall… 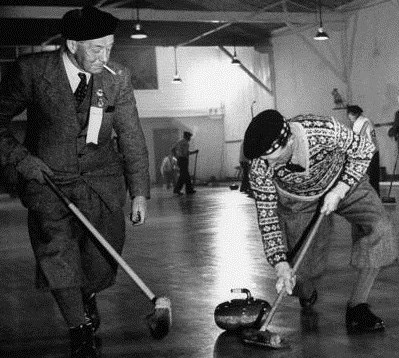 From personal experience, it was during the mid-1980s that the brush became popular with USA and Canadian curlers.


Posted by Angus MacTavish at 3:51 AM