Charles Lindbergh Coulda’ Been A Curler

It was 115 years ago, this month, that celebrated aviator Charles Lindbergh was born.  Did Mr. Lindbergh ever set foot on the ice to throw a stone?  He did have enough opportunities.

The record-setting pioneer was born Feb. 4, 1902, to Charles and Evangeline Lodge Lindbergh. He was born at his uncle Edwin’s house at 1220 W. Forest Ave., just a stone’s throw from The Detroit Curling Club (1236 W. Forest Ave.).  He grew up in Little Falls, Minnesota – less than a mile from the Little Falls CC.

Another connection to curling is that his great-uncle, John C. Lodge, was an avid curler and Life Member of The DCC (1909-1950).  Among his many accomplishments, Mr. Lodge served three terms as Mayor of Detroit.  Yes, he is the guy they named the expressway after.


Like The DCC, the “Lindbergh house” was torn down, a victim of urban renewal. An Associated Press story at the time says the Detroit City Planning Commission ruled that the famed aviator's birthplace was "undistinguished."  A housing development sits on the site today. 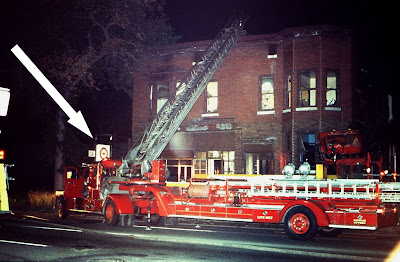 The building shown above is between the “Lindbergh House” and The DCC (note the sign above the firetruck).  (Thanks to Dallas Schneider for the photo).

Posted by Angus MacTavish at 4:02 AM