The earliest stones, known as 'loofies', were light in weight, ranging from about 15 to 25 pounds and had no handles, instead there were hollows or niches for the fingers and thumbs and the stone was presumably meant to be thrown.  Early stones were probably in use between 1500 and 1650.

Sometime in the 17th century the channel stone appeared.  A rough boulder, often taken from the channels or beds of rivers, was fitted with a handle, making it easier to throw.  With the assistance of the handle, a greater weight of stone could be used.  Some channel stones were enormous, weighing up to 183 pounds, although 35 to 45 were more normal.

It was part of the strategy of the game to use large unwieldy stones to knock out the opponent’s stones.  By the mid-18th century however, an attempt to standardize the game led to the introduction of the circular stone.  The earliest dated circular stone is from 1772.  The single sole or running surface was highly polished.  These stones had fixed iron handles, or occasionally brass handles.  Later, removable handles were developed to reduce damage during storage and prevent unauthorized use. 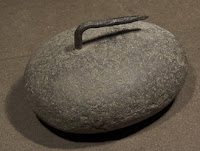 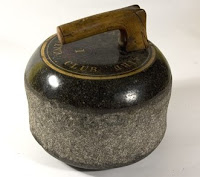 Channel Stone on the left.  Single Sole - Highly polished on the right.

Where suitable raw materials were available, there were masons who specialized in making curling stones.  By the mid-19th century mechanization was producing the highly polished circular stone familiar to the modern curler.  At the same time attempts were made to produce a running surface to cope adequately with both 'keen' and 'dull' ice.  In 1879 J.S. Russell of the Toronto Club introduced a double-soled stone to cope with this problem.  Today hundreds of identical stones are produced, accurate to half an ounce and polished to a splendid uniformity.  Few players now have their own stones, most using those supplied by the ice rinks.

The most famous source of raw material for stones is Ailsa Craig, a towering volcanic plug in the Clyde off the Ayrshire coast.  It produced Common Ailsa, Blue Hone Ailsa and Red Hone Ailsa stone.  From the late 19th century until 1952 quarrymen lived on the island during the summer months, producing between 1000 and 1400 rough blocks per year for shipment to the mainland.  Quarrying ceased temporarily in 1952.  In 1961 the Ailsa Quarrying Co. Ltd. resumed production.

At The Club, above the bulletin board, we have a series of photographs showing Ailsa Craig the birthplace of many of the world’s curling stones.  These were taken by DCC member Dr. James V. Lammy during the 1952 American Curlers’ trip to Scotland.

A curling we will go,
Angus MacT.
Posted by Angus MacTavish at 12:25 AM